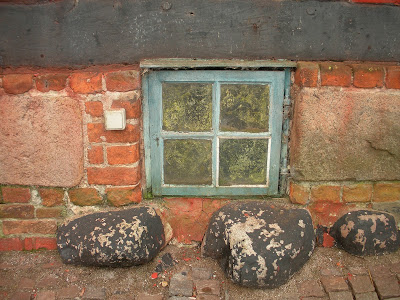 I used to find it fucking funny to lock my siblings in the basement.  I had to babysit five younger brothers and sisters growing up.  "Preteen" and "Responsible" aren't two words you'd frequently find together. I probably should've still had a babysitter myself.  Mom naively thought I was mature and responsible at the time.  Our cellar was a hoarder's dream, smelled like cat shit, cat piss & dead cat, and had too many windows.  I hated going down there myself at night, especially with all those windows.  Gave me the creeps.  Between the windows and the shadows behind the old oil-fired, moving van-sized furnace it always felt like I was being watched. I think that's why I got such a thrill out of locking them down there.  Years later I often fantasized about luring my father down there (all it would've taken is a bottle of booze or my aunt), violating him till he bled out with a nail-studded baseball bat I made as a teen and burying him under all that shit.  Might've made up just a little for all the beatings and for his role in my mother's death (just my opinion).  Ah, hindsight...
at February 26, 2021 10 comments:

Email ThisBlogThis!Share to TwitterShare to FacebookShare to Pinterest
Labels: Family

I don't know why, but when I was younger it bothered me that my mother had a boyfriend and he'd come over late at night and they'd go into her bedroom and shut the door.  I was never sure what they were doing in there. I was pretty stunted regarding all things sexual.  Anyway, one day I stuffed fresh batteries in my portable Panasonic tape recorder and went outside.  I plugged in a  microphone and dangled it by my feet as I walked around in the dry leaves.  My bedroom was right over my mother's, and late one night, after my mother and her boyfriend went into her bedroom and closed the door, I opened my window and tore a hole in the screen.  I had this large metal loudspeaker wired up to the tape recorder, and dropped it through the screen on a length of wire.  I stopped right about where I thought her window was, then pressed play.  I don't know if they ever heard my footsteps.  She never said anything about it.  Not sure what I got out of it, either.

Email ThisBlogThis!Share to TwitterShare to FacebookShare to Pinterest
Labels: Family

I'm his wife, not his babysitter.  I've pumped out, raised and waved off two spawn over the years, and here I find myself practically having to raise another one.   Only this one's a grown man.  Having to leave him notes for even the simplest thing is getting old real fast. And don't give me that shit about aging, early onset this, that or the other.  It's all horseshit.  I'm about the same age and I don't have a problem remembering anything.  And passion?  Don't even get me started on that.  Mister Softy- we've given each other pet names over the years- wouldn't even know how to fuck me if I crawled to him, begging for it.  At this point I'm about like a wrinkled paper bag anyway. Reminds me of those "Fire Danger" warning signs at the state park entrance.  I'd have to have one tattooed on my fucking belly these days.

I've given up so much.  But whatever.  Lately, when he walks in the door all I can do is look at him, hoping he'll be better, then look away once I see that blank gaze.

Grandpa Died and I Laughed

Story:  Things told to me that are one person's view and are likely slanted

Like so many parts of my life that exist only in stories I learned one day recently that (Story) father had died in the care of a sibling who (Story) didn't love him; who (Story) was an addict; who (Fact) was angry and had this powerful need to prove something.  Father, absent even when present, was (Fact) a sickly, mean, alcoholic, abusive, depressed psychotic poor excuse of a man.  Nonexistent to me for decades now.  It was during a telephone conversation with my youngest son from prison (him, not me)- the first time we'd spoken since the last time he was on the high side of one of his meth slopes & valleys (several years ago now)- when I remembered and casually mentioned it.  "Oh, I forgot.  Your grandfather died."  I laughed.  "Oh, umm, okay," he said.  And then he laughed.

Things I've learned over the years come only from siblings and assorted others, but I also learned late in life to take everything with a grain of salt.  My wife forced me to see things this way.  The drama, depression and addiction has steered my family for years, and until my wife's lesson I'd just taken everyone at their word.

The same, I suppose, goes for mother.  I'm told (Story) she died a few years ago.  At least two siblings (Story) saw her after she passed, but (Fact) I never got to. The funeral director was so ired by my obnoxioux family that (Fact) when I contacted him to request a visit to pay my last respects he (Fact) said he didn't want me there.

I've (Fact) never seen an obituary for either parent.

Funny, I was told once by an old family friend that (Story) my uncle was actually my father.  But that's for another post.

Tom's my good friend.  Not my best friend, just good.  I've known Tom for 6 months, and yesterday I read an article about Tom.  The article says Tom did a bad thing.  Tom dropped a litter of gerbils down a well.  He took the gerbils from his daughter's room, placed them in a brown paper bag and went out in the back yard and dropped them in the well.   The plywood over the well wasn't attached, just laying over the well, so it was easy to move.  Who even has a well in their back yard any more?  Was there water in the bottom of the well, or was it just a dried out well?  If the well was no longer in use shouldn't it have been covered or filled in, or whatever you do with a disused well?  I'm wondering if Tom ended up replacing the plywood since it was pretty well weathered and warped and the layers were all peeling the way plywood does when exposed to the elements.

The notes are all over the place.  She leaves them for the stupidest little thing.

I don't think there's anything she hasn't left a note about at this point.  I know I forget things.  Doesn't everybody?  I fight saying things like "I feel old", or "I really feel my age today".

Sometimes I swear I did a particular task, only to have her fume and not talk, and when I finally get her to open up find out I didn't do it.  But I think I did.  This happens more and more.

Sometimes I think she's trying to make me think I'm losing it.  I'm not sure yet how that would benefit her.  We count on my income so I need to keep working into beyond retirement. So that can't be it.

Now and then I'll come home early and she'll just look at me, like "oh, you're home."  Makes me wonder what she was in the middle of.  Is she planning something?  Is there something she doesn't want me to know about?